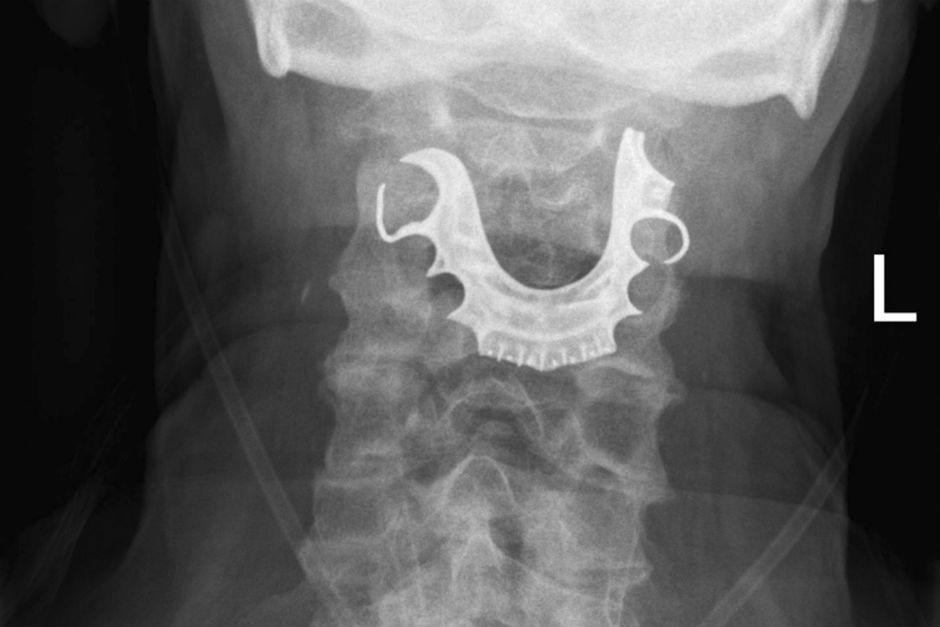 Here's why it's best to remove false teeth before surgery: You just might swallow them.

A medical journal is reporting the case of a 72-year-old British man whose partial dentures apparently got stuck in his throat during surgery and weren't discovered for eight days.

The man went to the emergency room because he was having a hard time swallowing and was coughing up blood. Doctors ordered a chest X-ray, diagnosed him with pneumonia and sent him home with antibiotics and steroids. It took another hospital visit before another X-ray revealed the problem: His dentures — a metal roof plate and three false teeth — lodged at the top of this throat.

The man thought his dentures were lost while he was in the hospital for minor surgery.

How it happened isn't exactly clear, but a half-dozen previous cases have been documented of dentures going astray as surgical patients were put to sleep.

Placing a tube in a patient's airway can push things where they don't belong, said Dr. Mary Dale Peterson, an anesthesiologist at Driscoll Children's Hospital in Corpus Christi, Texas.

Besides dentures, retainers, loose teeth and tongue piercings can cause problems, said Peterson, who is president-elect of the American Society of Anesthesiologists. Before a child's surgery, she'll pull a very loose tooth and tell the patient to expect a visit from the tooth fairy. "We can make a nice game of it.”

In the British case, after the dentures were removed, the man had several bouts of bleeding that required more surgery before he recovered. The journal article didn't identify the man or the hospital involved.

What can be learned from this case? Doctors need to listen carefully to their patients and build a timeline of what happened rather than relying heavily on scans and tests, said Dr. Rui Amaral Mendes, an associate editor of BMJ Case Reports, which published the paper Monday.

For their part, patients should tell their doctors about mouth problems before surgery, said Mendes, an oral surgeon at Case Western Reserve University in Cleveland. That includes dentures, blisters and serious gum disease. Loose teeth could be knocked down the throat when tubes are put into the airway.

"Stay on the safe side," he said. "Inform your physician of what's going on in your mouth.”